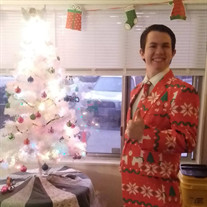 It is with great sorrow that we say goodbye to Robert Christopher Melton Jr, AKA Christopher Melton. He was 25 years old. He lived in South Lake Tahoe, California. On November 24, 2021, Christopher was struck by a vehicle while riding his bike along highway 50. He was care-flighted to Renown where he succumbed to his injuries on December 14, 2021, at 1:58 PM. Christopher was born on May 19, 1996 in Stockton California, where he was raised for the first 11 years of his life. Christopher and his sister Katryna were brought to South Lake Tahoe by their father in July of 2007. Christopher attended South Tahoe Middle School and Graduated South Tahoe High School in the year of 2014. Christopher attended Bible College in Redding, California. Christopher was employed at Caesar’s Entertainment as a Hotel Front Desk Agent. He started his employment there in 2017. Christopher’s interests included playing X-Box and building Legos with those around him. Christopher was a real man of God. He was strong in his faith. He attended weekly church and bible studies. His faith came to him after an accident in May of 2010. Christopher had a major accident and had severe head trauma after riding a bicycle without a helmet. He was admitted in the ICU at Renown at the young age of 13. He spent his 14th birthday in a coma. He managed to regain consciousness and regain most of his verbal and mobile abilities. He was partially paralyzed on his right side. Christopher believed with all his heart that God gave him a second chance at life; to be with his family and be an example of the seriousness of not taking safety precautions while riding a wheeled vehicle. Christopher was a very humorous man, whom enjoyed making jokes. He had the brightest ability with everyone he met and befriended to make everyone laugh. His joy could light up even the darkest room. He never let his handicap get in the way of his spirit to look at life in a humorous way. He could deliver jokes but could be on the receiving end of jokes just as easily. Christopher’s laughter could light anyone’s day. It was contagious. He would laugh and then cause a train of laughter with the people around him. Christopher is survived by his family and friends. He was raised by his father Robert Christopher Melton Sr. and his mother, Julie Ann Marie Galicia. He had three other siblings by the name of Michael Porter-Melton (32), Alyssa Lugo (30), and Katryna Bell (29). He was a loving uncle to his Nieces and Nephews. He had a dear friend by the name of Rachel Walker (29) who he spent most of his time with. Christopher’s service will be held on January 2nd, 2022 at Sierra Community Church at 2PM. For those who would like to share their condolences, stories, ect. It will be an open memorial. Please come and join the family as we celebrate the life that was Christopher Melton. All are welcome. The family has a GoFundMe page up to help with funeral costs and final affairs. Please donate what you can. A dollar can go a long way. All left over funds will be donated back to charities such as this to help other families in need. Thank you everyone from our family to yours for keeping us in your prayer and thoughts.

It is with great sorrow that we say goodbye to Robert Christopher Melton Jr, AKA Christopher Melton. He was 25 years old. He lived in South Lake Tahoe, California. On November 24, 2021, Christopher was struck by a vehicle while riding his bike... View Obituary & Service Information

The family of Robert Christopher Melton created this Life Tributes page to make it easy to share your memories.

It is with great sorrow that we say goodbye to Robert Christopher...