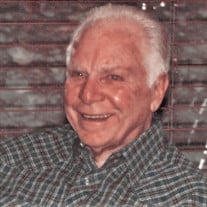 Robert Curiel of South Lake Tahoe, passed away very unexpectedly Sunday February 23 2020. Robert was born December 27, 1929 in Los Angeles, CA, a child of the late Julius and Margaret Curiel. Robert is preceded in death only 19 days prior by the love of his life and wife of 69 years, Shirley Curiel. Robert was the true definition of a remarkable husband and devoted his entire life to loving and caring for his wife and family. Robert is survived by his two daughters Debbie Gienapp and Roberta (Doug) Van Gorden, three Grandchildren Chrissy (Cody) Summerville, Bobby Gienapp and Michael (Jennifer) Van Gorden, as well as his most special four great-grandchildren Elijah, Holly, Brayden and Maxwell. Robert was an incredible father, grandfather and great grandfather, and his love for his family was undeniable. Robert and Shirley were married in August of 1950 after a short romance. Soon after being married, he was called to serve in the Korean War. After his return, they started a family in Southern California. While raising their children, Robert and Shirley where deeply involved in the Masonic Lodge where Robert was Master of his Lodge and his daughters were members of Job’s Daughters. In 1978, Robert and Shirley move their family to South Lake Tahoe, CA where they bought a motel and started a new, more relaxed life in the mountains. After their time with the motel, Robert got back into his passion of civil engineering and spent the next 40 years working on many projects throughout Tahoe, Glenbrook and Northern Nevada areas. He loved his work and had no desire to ever retire, still working up until just days before he passed. Robert was kind, loving and a truly giving person. He was the rock of his family and the source of knowledge and advice to all. He was admired and respected by so many, and although he leaves behind an enormous void to all who knew and loved him, we take great comfort knowing he is home with our Lord Jesus and reunited with his Shirley for eternity. A service will be held Monday March 9, 2020 at 12pm at Happy Homestead Cemetery in South Lake Tahoe and a tribute page can be found at the Mcfarlane Mortuary website.

Robert Curiel of South Lake Tahoe, passed away very unexpectedly Sunday February 23 2020. Robert was born December 27, 1929 in Los Angeles, CA, a child of the late Julius and Margaret Curiel. Robert is preceded in death only 19 days prior by... View Obituary & Service Information

The family of Robert Curiel created this Life Tributes page to make it easy to share your memories.