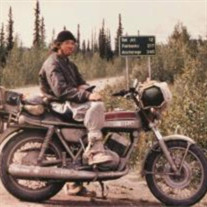 Robert “Bob” Andelman July 17, 1954 - May 9, 2021 Bob was born in Van Nuys, California, to Maurice and Sally Andelman. He grew up in Sun Valley and Simi Valley, California. He graduated from Simi Valley HS and then went to Moorpark College and California State University, Northridge, graduating with a BA in English. After college Bob worked locally and traveled domestically and internationally. He finally found his way to Tahoe where he made his home for almost 40 years. Bob met many people during his years in Tahoe and is remembered by those closest to him as a person of integrity, who did not judge others for their beliefs, and had technical and artistic skills appreciated by many. Bob's artistic side ranged from photography, to the written word, eventually leading to a passion for pottery in his later life. He was accomplished and prolific in each. During his college years Bob won a prestigious award for his poetry and was a respected, published poet before his senior year. The travel bug took hold of Bob early on. He backpacked around Europe and North Africa during summer breaks. Sipped wine in France, dipped humus in Morocco long before it became fashionable, and enjoyed the countryside of Belgium, and much of Europe. Bob tracked down a famous guitar maker in Spain whom he admired, met him for lunch, and bought a prized classical guitar from him. His adventurous spirit took him on a solo motorcycle trip to Alaska. That journey was detailed in words and pictures by Bob that was eventually published in a national magazine. Bob had an uproarious sense of humor that both engaged and delighted others. His subtle stunts, pranks, and good hearted fun will be sorely missed by friends, but very fondly remembered. Bob is survived by his brother, Pete Andelman, sister Nancy Davidson, brother-in-law Marshall Davidson, nieces and nephews Carol Lesser, Laura Buller, David Lesser, and Randy Buller, grand-nieces and nephews Sarah, Hannah, Justin, and Andrew. He is also survived by his lifelong friends Gary, Larry and Dale, as well as many others. In lieu of flowers you can honor Bob’s memory by being a good friend, taking a walk in the pines and appreciating the beauty Tahoe has to offer.

Robert &#8220;Bob&#8221; Andelman July 17, 1954 - May 9, 2021 Bob was born in Van Nuys, California, to Maurice and Sally Andelman. He grew up in Sun Valley and Simi Valley, California. He graduated from Simi Valley HS and then went to Moorpark... View Obituary & Service Information

The family of Robert "Bob" Andelman created this Life Tributes page to make it easy to share your memories.