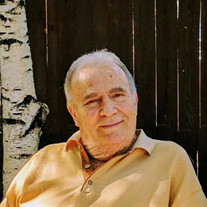 On May 12th, 2020, Richard (Rich) Durwood Elder entered God’s Kingdom. Rich was born on January 20, 1937 in San Francisco, CA. He was raised in Marin County, California. After serving in the U.S. Army and stationed in Japan, Rich settled in South Lake Tahoe with his wife Carol. Together, they lovingly raised four children. Among his early adventures, Rich was the Captain of the Tahoe tour boats that have famously delighted thousands of visitors on Lake Tahoe. He began his career at Harveys Resort Hotel/Casino in the late 50’s, retiring in 2000, at which time he was a Games Supervisor. Rich was known for telling a joke and being able to take a joke. He was loved by many and still maintained a number of relationships with his fellow Harvey employees up until his passing. Rich was a member of St. Theresa Catholic Church in South Lake Tahoe. He also was a proud member of the Knights of Columbus. Rich was an avid skier at Heavenly Mountain during his life with his wife and children. He and Carol summited Mount Tallac, with an elevation of almost 10,000 feet, several times; their final summit being when they were in their 60’s! Rich was also an expert target shooter, making the trip down to a range in Carson Valley with his friend Byron, his son Richie and even his grandchildren, to hone their marksmanship! The entire ride was filled with telling stories, some of which were even true! Rich visited many countries in his life with his family including England, France, Italy, Greece, Turkey, Finland, Norway and Russia. Rich is survived by his daughter Michelle Elder and partner Kyle Settles, his son Richard (Richie) Elder, wife Kim and children Whitney and Jason, and his daughter Stacey Barsema, husband Dennis and children Matt, Eric and Jason and their families. Rich is also survived by his brother Steve Elder, wife Willy and their family, as well as many great-grandchildren, nieces and nephews. Rich was preceded in death by his wife Carol Roberta Elder, parents Mona Vae Richards and Clifford Francis Elder, and his oldest son Steven Michael Zaner Elder. Due to Covid-19 restrictions, the funeral service at St. Theresa Catholic Church will be a family only private service. The family will plan to do a Celebration of Life later this summer when restrictions are lifted on gatherings. The family would also like to acknowledge the loving work and care of Dr. Henning Mehrens, and the nurses and other health workers at the Barton Skilled Nursing Facility, where Rich lived the final four years of his life. Their unfailing devotion to providing Rich the greatest of care and support filled his final days with peace and grace. Thank you to those and all health care professionals during these unprecedented times.

On May 12th, 2020, Richard (Rich) Durwood Elder entered God&#8217;s Kingdom. Rich was born on January 20, 1937 in San Francisco, CA. He was raised in Marin County, California. After serving in the U.S. Army and stationed in Japan, Rich settled... View Obituary & Service Information

The family of Richard Durwood Elder created this Life Tributes page to make it easy to share your memories.