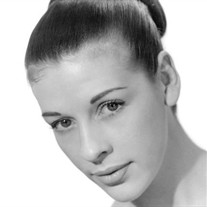 Patricia (Pat) Joyce Johnson a resident of South Lake Tahoe for over 60 years passed away on December 7, 2021. She was born in Adelaide Australia on January 31, 1939 to Ernest and Dorothy Date. Pat grew up in Adelaide Australia, and at a very early age showed a strong talent for Acrobatics and Dance. After winning various competitions in South Australia, her dance partner and lifelong friend, Tom Fairley, managed to secure her an audition for a large production in London and she got it. The production moved from London to Paris and later to a small desert town at the time … Las Vegas! The troop eventually traveled up to South Lake Tahoe to do a few shows at the Harrah’s Casino where Pat met her first husband, Ronald Renaldi, a Tahoe local. Together they had three children: Michael, Jillian, and Christopher. In 1970 Pat met her second husband and soulmate, Warren Johnson who moved up from Escalon California. Pat volunteered at the South Tahoe High school’s drama department to share her stage experience and then worked part-time at the high school cafeteria where she met many of her lifelong friends, and she always made sure she was home in time to take care of her family. Ever the Australian, Pat enjoyed having afternoon tea with fellow Australian transplants Brenda Stewart, Cindy Gerkin, and “Honorary Australian” Betty Whiteley. Among her many friends in Lake Tahoe were fellow workers Monique Brulhart and Beverly Madore. Pat also made sure to keep in touch with two of her dearest and closest dance buddies from her past, Jillian Hrushowy, and Tom Fairley. Even though Pat was an Australian at heart she eventually became a US citizen of which she was very proud. She also continued to stay in touch with her Aussie roots throughout her life. Her heartfelt love for her brother Don, his two daughters Heather and Delia, and their kids gave her great joy. After retirement, Pat and Warren became snowbirds and spent many winters at their Condo on the Island of Oahu in Hawaii. When the warm weather returned, she always looked forward to making the journey back to her home in Tahoe to see old friends and tend to her beautiful garden and birds. Pat had a truly adventurous life and will be profoundly missed by her friends, neighbors, and family both here and in Australia.

Patricia (Pat) Joyce Johnson a resident of South Lake Tahoe for over 60 years passed away on December 7, 2021. She was born in Adelaide Australia on January 31, 1939 to Ernest and Dorothy Date. Pat grew up in Adelaide Australia, and at a very... View Obituary & Service Information

The family of Patricia Joyce Johnson created this Life Tributes page to make it easy to share your memories.