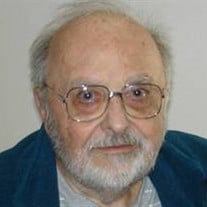 Maj. Nick Garofalos USAF (Ret.) age 84, passed away in Carson City, Nevada on November 20, 2011 following an extended illness. He was born on September 5, 1927 to George Garofalos and Anna Papadoglou Garofalos in Middletown, Ohio and raised in a close knit Greek community in that town. At the age of four years old, he could recite The Lord’s Prayer in Greek, and entered first grade where he quickly learned the English language. He graduated from Middletown High School in 1945 and was drafted into the Army, being stationed in France from January 1946 to the summer of 1948. He then attended Miami University in Ohio, graduating with a degree in Business Administration through the ROTC program. While attending the university, he worked at Middletown Hospital where he met his future wife, Mavis, with whom he was happily married for nearly 50 years. Following graduation, his military career continued in the Air Force serving with special communications services throughout the Korean and Vietnam Wars with additional time spent in many U.S. locations. He always laughed when recalling that his family had moved 26 times during the 22 years of his military service. Upon his military retirement in 1971, his family settled in South Lake Tahoe where he worked in real estate and casino surveillance, and was a member of the “Military Officers Association of America” (MOAA). He continued to reside there until moving to the Carson Valley in 2006. He is survived by sons: Steve (Ardel) Garofalos of South Lake Tahoe, and John Garofalos of Meyers, grandsons: Nathan and Derek Garofalos of South Lake Tahoe, siblings: John Garofalos of Mill Valley, Mary (Bob) Gremley of Lincolnshire, Illinois, Cleo (Bill) Garvin of Fair Oaks and many nephews and nieces. He was predeceased by his wife, Mavis Garofalos in 2001. He will be greatly missed by his family, but they are comforted knowing he is now reunited with his wife Mavis, and they are once again able to enjoy a shared favorite activity, a scenic walk together. Funeral arrangements are pending and information will be available soon at: McFarlaneMortuary.com PDF Printable Version

The family of Nick created this Life Tributes page to make it easy to share your memories.