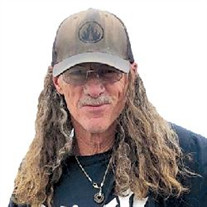 Mark Brown, 55, of South Lake Tahoe, passed away suddenly from a heart attack on December 18, 2019. Mark was born in La Habra, California, son of Chris and Tom Brown, older brother to Adam and Matt, where he became an avid surfer and lover of the outdoors. Mark was active in theater at La Habra High School and after graduating joined the Navy serving his country aboard the USS Mauna Kea. Mark’s time in the Navy fueled his sense of adventure and made him a seasoned world traveler. After an honorable discharge, Mark landed in South Lake Tahoe for the 91/92 ski season where he began his 20 year career working at Heavenly, teaching skiing and running the Cal Kids ski program. He made a huge impact on the ski community and had an undeniable gift for working with kids. In the early 2000’s Mark changed direction and started his own business, Big Blue Painting, which allowed him to devote more time to his new found passions- Roller Derby and Stand Up Paddle. Mark “Coach Hammer” Brown was instrumental in developing the Tahoe Derby Dames Roller Derby Team and his passion for teaching, coaching, skating and people allowed him to form lasting friendships with so many who crossed his path. He never lost his love of water or surfing and found paddle boarding to be the perfect fit for his lake life. Mark loved to paddle on East Shore and had a knack for snapping pictures of the perfect sunsets and mountain views with the tip of his board in every shot. The songs of Aerosmith created a soundtrack for Mark’s adventures and his zest for life was unparalleled. Mark’s smile and positive outlook were infectious, and he brought a bit of joy to everyone he met. Mark leaves behind his daughter, Taylor, her mom, Debbie, and an army of friends and fans all over Lake Tahoe. A Celebration of Life will be held Monday, January 27th, 5pm at Cold Water Brewery & Grill, for Marks family and friends. Dress code is as Mark would have wanted: Rocker, Funky, Disco or Derby. Please post your favorite pictures of Mark on the Mark Brown Memorial Facebook Group or send them directly to [email protected] In lieu of flowers, A Go Fund Me account has been created in his name to support his daughter, Taylor, during this difficult time.

Mark Brown, 55, of South Lake Tahoe, passed away suddenly from a heart attack on December 18, 2019. Mark was born in La Habra, California, son of Chris and Tom Brown, older brother to Adam and Matt, where he became an avid surfer and lover of... View Obituary & Service Information

The family of Mark Stephen Brown created this Life Tributes page to make it easy to share your memories.

Mark Brown, 55, of South Lake Tahoe, passed away suddenly from...