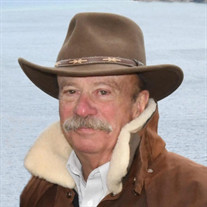 LYNN DOYAL, 73 Lynn Doyal, 73, passed away October 14, 2020, with his wife Janis by his side at their home. Lynn was born in Turlock, California on May 8, 1947 to Jack and Elyse Doyal. He lived most of his life in Alpine County, California, Hope Valley and Woodfords. Lynn graduated from Douglas High School in 1965. He joined the U. S. Navy in 1967 to serve 6 years during the Viet Nam war. He was assigned first to a boomer diesel submarine, then to a fast attack submarine, Seadragon, as a Nuclear Reactor Test Engineer. Lynn completed his B.S. Engineering degree in Moscow, Idaho, during which time he worked at the nuclear power plant in Arco, Idaho. After returning to Alpine County in 1986, he owned a small business designing and drafting house plans in California and neighboring Nevada. He also volunteered for many years as a firefighter, emergency medical technician, and search and rescue team member. He contracted with Alpine County to serve as the Emergency Medical Services Coordinator, providing training and support to several county departments and volunteer organizations. Lynn established the first ambulance service in Alpine County. Lynn was passionate about education, and often stated that a day without learning something was a wasted day. He served 8 years and 1 month on the Alpine County School Boards, 1988–1997. He also enjoyed hunting and fishing in his recreational time. He loved the outdoors, sharing his passion with his father, brothers, children, grandchildren, and close friends. Mr. Doyal is survived by his wife of 35 years Janis, mother Elyse, brother Dennis, sons Ted and Brian, daughter Kindra, nieces Heidi and Cheryl, nephew Michael, 6 grandchildren, and 1 great grandson. He was preceded in death by his father Jack and his brother Daniel. Lynn’s last fondest wish was to be able to help with education of his grandchildren. In lieu of flowers, the family would appreciate donations to: Lynn Doyal Memorial Family Education Fund, El Dorado Savings Bank, 1517 Highway 395 North, Gardnerville, NV 89410, or to any El Dorado Savings branch. The Celebration of Life will be rescheduled to a later date, due to a Covid-19 outbreak in Alpine County.

LYNN DOYAL, 73 Lynn Doyal, 73, passed away October 14, 2020, with his wife Janis by his side at their home. Lynn was born in Turlock, California on May 8, 1947 to Jack and Elyse Doyal. He lived most of his life in Alpine County, California,... View Obituary & Service Information

The family of Lynn Alan Doyal created this Life Tributes page to make it easy to share your memories.