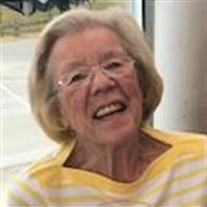 The adventure began when our vibrant, life-loving, independent mom was born on July 2, 1933 in Oakland, CA to John Stanley and Virginia Tallerday Thompson. Mom was a proud 4th generation Northern Californian. Her given name was Kathleen but as a youngster, when she stated her name, it sounded like “Colleen” so that is what she became known by. It certainly fit this Irish lass! After learning recently that her cancer was terminal, she exclaimed “It has been a great run!” She left us on June 17th, in her Tahoe home that has been in the family for almost eighty years, surrounded by loved ones, with the same grace with which she lived her life. Mom grew up in Piedmont, California where she met her lifelong friend, Mary Heidt Connolly, at the beginning of junior high school. They were confirmed in the Catholic faith at St. Leo’s in Oakland. Mom’s faith was an integral and grounding aspect of her life. She attended the University of California in Berkeley, joined the Gamma Phi Beta sorority, and graduated with a degree in political science. She met our dad, Gilbert Wright, on a blind date and they were married in the Old Mission Church in Santa Barbara on January 7th, 1956. Shortly after the wedding, they drove across country to Notre Dame where Dad got his master’s degree, on to Buffalo, NY where he taught at Canisius College, back to the Midwest to Madison, WI where Dad got his Ph.D. in Medieval English, finally settled in Champaign, IL where dad began teaching at the University of Illinois. Along the way they made many lifelong friends, and 4 of their 5 children were born. In 1965 the family headed to England for a year and after Dad saw an amazing performance of Romeo and Juliet with Margot Fonteyn and Rudolf Nureyev, a new passion for ballet was born, changing the trajectory of their lives. Back in Champaign, now with 5 children (the youngest was born in England) Mom and Dad worked tirelessly, first founding the Illinois Foundation for the Dance and then in the fall of 1972, opening the National Academy of Dance, a boarding high school. A few years later, the National Ballet of Illinois was founded as an independent professional ballet company, and the high school was renamed the National Academy of Arts, when it added a music division. Those years were filled with receptions and parties for visiting ballet companies, including the American Ballet Theater, the Joffrey Ballet, and the Alvin Ailey Dance Company. Mom was a superb hostess and cook, often hosting as many as 200 hundred guests at a time, learning to make Russian desserts for guests such as Natalia Makarova. She was famous for her beef bourguignon that could have served an entire army! Every summer all seven of us, and various pets, packed into the station wagon and drove across country to our house in Lake Tahoe, spending our time with extended family as well as skiing and swimming in the clear blue waters. The school eventually closed due to funding issues, but Mom and Dad were very proud of the wonderful students who were like family to them. They stayed in touch with many of them. Mom and Dad moved full-time to the Tahoe house in 1978, and Mom went to work for Harrah’s Hotel/Casino, climbing the ladder to eventually become Convention Sales Manager, a job she loved and at which she excelled. When they retired, Mom and Dad had a grand time taking their travel trailer on memorable trips to 50 national parks, Alaska, and across the U.S and Canada. After Dad died in 2006, Mom enjoyed several trips overseas, visiting China, Egypt, Russia and Europe. She also delighted in spending time with her many friends in Marla Bay/Lake Tahoe and beyond, playing bridge, attending Tuesday ladies’ wine night, and volunteering for the outreach program at her parish. She kept very busy and had many wonderful friendships which she deeply cherished. Mom is survived by her children Mary (Rich), John, Joe (Lisa), Jim, and Becky (Darren) as well as her grandchildren Janelle, Daniel, Celina (James), Nate, Lindsay (Chad), Geoff, Matthew, Brian, Ashlyn, Jack and Jessa. She is also survived by great grandchildren Caleb and Acacia. Hers was a life well lived, filled with love, laughter and unwavering faith! A celebration of life will take place at a future date. Memorial contributions may be made to: Our Lady of Tahoe Outreach Program, Attention Francine Alling, POB 115, Zephyr Cove, NV 89448.

The adventure began when our vibrant, life-loving, independent mom was born on July 2, 1933 in Oakland, CA to John Stanley and Virginia Tallerday Thompson. Mom was a proud 4th generation Northern Californian. Her given name was Kathleen but... View Obituary & Service Information

The family of Kathleen Thompson Wright created this Life Tributes page to make it easy to share your memories.

The adventure began when our vibrant, life-loving, independent...