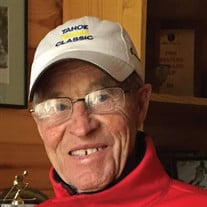 On March 9, 2019, John Gianotti, community legend and loving friend to many, passed away at the age of 90. John was born in Helper, UT, on October 12, 1928. As a young boy, he lived in the now ghost town of Walkermine, CA and had the opportunity to spend a winter at Sugar Bowl living with Hannes Schroll, the founder and Pro at Sugar Bowl, sparking John’s skiing passion. John graduated from Fortuna High in Fortuna, CA where he was the quarterback of the varsity football team. He lettered in both football and basketball,1942-46. He attended Menlo Junior College in Menlo Park, CA for two years while lettering in baseball. In 1948, John received a ski scholarship to UNR and soon became Captain of the Ski Team. Graduating in 1950, he became a teacher and coach and arrived on the South Shore in 1954. It was a chance meeting with Bill Harrah that changed his career…first as a cashier, then a dealer. John was specially selected to oversee the 1960 Squaw Valley Olympics hospitality office. He became an executive member of the Harrah’s organization as Executive VP of Community Affairs. He was in the center of things while the 18-story Harrah’s Lake Tahoe casino was built. His name is engraved along with Bill Harrah’s somewhere on a beam at the top of the hotel. John was instrumental in working closely with various Governors of the State of Nevada and the Nevada Legislature to bring about many changes for the local community. He created and headed the Highway 50 Association and was the driving force for the implementation and completion of the 4-lane Highway between Carson City and Stateline. John was on the Board of the Barton Memorial Hospital and served two times as President. Early on he helped lead the charge to raise $600,000 to build the hospital. He was a proud supporter of the Nevada Rock Art Foundation dedicated to protecting and preserving the petroglyphs and pictographs in Largomarsino Canyon. John has been characterized as very charismatic, funny and a larger-than-life fun-loving man! He had a passion for every part of life, especially skiing! He became a champion ski racer in the USSA Masters and Far West Ski Association. With more than 600 races under his belt, John took home more than 500 awards, 400 of them first place. Named USSA Master Skier of the Year three times during his 23 years with the United States Skiing Association, John medaled in Italy, Switzerland, Canada, Austria, Germany and Spain. He championed his namesake the Viva Italia Race at Heavenly, which was shouted to him from start gates and podiums around the world. John had a lively sense of humor and love for all people and many lifelong friends. John’s joy was making people smile. First on his list of sports was skiing, then tennis, golf and fishing. He loved hiking, backpacking (achieved Base Camp Mt. Everest), running, bicycling and working out at the gym, and his love for fitness led him to own a fitness center in San Diego for several years. John lived for sports and always sought to help those in need. John was a true mountain man and loved adventure, also appreciating fine arts and music. He supported all youth sports, often one could find him rooting on the local High School teams, regardless of the sport. He was an enthusiastic real estate associate with Chase International for many years selling the dream of a place he loved to call home – Lake Tahoe. He spread his contagious love for life with everyone he encountered. John was predeceased by his father, Ernest, his mother, Elizabeth, and his sister, Lisa. He is survived by his son and friend Michael Killebrew, brother, Ernie; nieces, Chris, Lisa, and Stefani; nephew, John; Godson, Matthew Hendricksen and his dear friends, Shari Chase, Holmes Hendricksen and Wayne Denney. John requests celebrating his life by taking a few moments every day to be grateful for all those closest to you. In lieu of flowers, John requests that donations be made in his memory to the Wellness Fund at Barton Foundation, 2092 Lake Tahoe Blvd., Suite 600, South Lake Tahoe, CA 96150 or call the Foundation at 530-543-5614; or a charity of your choice. For other inquires contact Shari Chase at 775-762-6130.

On March 9, 2019, John Gianotti, community legend and loving friend to many, passed away at the age of 90. John was born in Helper, UT, on October 12, 1928. As a young boy, he lived in the now ghost town of Walkermine, CA and had the opportunity... View Obituary & Service Information

The family of John Gianotti created this Life Tributes page to make it easy to share your memories.