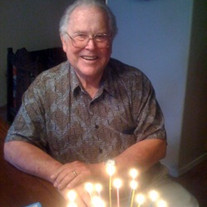 James Raymond Steele, aka: Jim, Jimmy, Grandpa Jim, Grandpa Whitehair and Grandpa Coco, was born in Modesto, California on February 9, 1928 to Al and Beth Steele. He joined his older brother Dan, which would comprise the Steele family. Jim survived a car accident when he was roughly a year old. His mom was driving and he went face first through the front windshield of the car (that, incidently, is when he picked up that lovely scar on his face). Soon after, the family moved to Hayward, and then Oakland in 1943. Dad's mom, Elizabeth, died from leukemia a week after he graduated from high school. He then went and lived with his Aunt Esther and Uncle Al in Hayward, California. Aside from a brief high school job working at a grocery store in Mt. Hermon, he started working for Leslie Salt Company, swinging a sledghammer and building the basins for the salt ponds which are still standing today. Forty-two years later Jim retired from Leslie/Cargill, most of that time serving as the company's Traffic Manager (overseeing the shipping of salt from the Sierra Mountains to the Hawaiian Islands). Jim met Shirley Singleterry at Melrose Baptist Church in Oakland and, after a brief courtship, they were married on October 14, 1949. A year later Cheryl was born, then Gary in 1953, and finally, Greg, in 1962. Jim and Shirley also have eight grandchildren, and five great grandchildren. Cheryl currently lives in Simi Valley with her husband, Gordon, and her four children and five grandchildren. She is an administrator with the Conejo Valley School District. Gary and his wife Anne live in Shingle Springs, California, along with their son. Gary is recently retired from the Sacramento County Probation Department. Greg and his wife, Teri, live in Walnut Creek with their three children. Greg is the Administrator of NorthCreek Academy and Preschool. Jim was born into a family which was committed to Christ. His grandfather was a pastor in Modesto, and his mother played a key role in his spiritual heritage. He recognized his need for a Savior and surrendered his life to Christ as a young child. Over the course of his life Jim and Shirley attended Melrose Baptist Church in Oakland, Fairway Park Baptist Church in Hayward, Redwood Chapel in Castro Valley, and finally Journey Church in Sacramento. Jim served in the music ministries of these churches by leading choirs, playing the piano, and singing in choirs as well. For many years, he was the esteemed pianist for the fourth grade Sunday School classes at Redwood Chapel. Once Jim and Shirley discovered they could cook and feed over 500 people, they did so many times while serving at Redwood Chapel. They catered many "Sweetheart Banquets" and weddings in the 1980s and 90s. Jim and Shirley lived at "The Duck Club" in Newark for a bit, then to Fremont for nearly 40 years before moving to El Dorado Hills in 2001. Although they had residency in California, it was widely known that Jim and Shirley were normally on a trip somewhere with friends, especially after Jim retired in 1987. Mom and dad enjoyed traveling on cruise ships, visiting with family, and generally traveling anywhere possible, and they did, including many trips to Europe, Mexico, Hawaii, China and Florida. Most who know Jim will remember him with a story- or two, or three, or more. He seemed to bring laughter into conversations (both knowingly and otherwise), an eagerness to play any table game at hand, and ideas for a next meal on command. He left us with many, many fond memories. We sincerely hope you will leave some of your favorite memories with us so that we can treasure them, too. Please be sure to add a story or more in the LIFE STORIES heading above, and/or sign the guestbook, and if you have a picture to share, note the PHOTO GALLERY bar beneath Jim's picture on the top right of this screen. PDF Printable Version

The family of James Raymond Steele created this Life Tributes page to make it easy to share your memories.