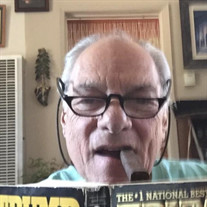 Elliott Israel July 27, 1945 – April 5, 2021 Harry Elliott Israel Passed Monday, April 5th at the age of 75 following two successful battles with cancer over the last 15 years. Elliott was a California native. Following his Vietnam- Era Navy service, he returned to live most of his life in California, as well as time in Nevada. He worked for years in the gaming industry rubbing shoulders with celebrities of the day including members of the famous “Rat Pack.” While always remaining the ladies man, Elliott transitioned from the gaming world into the art world, a field of interest and study since childhood. He worked very successfully as an art consultant for over 35 years in both Nevada and California. His last 16 years Elliott worked with a major fine art gallery in South Lake Tahoe where he was affectionately known as “EL” The gallery was honored to have him as their first art consultant upon opening. El had an almost Shakespearean style and flair when sharing information about artists, gaining him the nick name of “Sir Elliott”, yet despite his title he was down to earth and humorous. When clients found Elliott dusting the sculptures and asked if he was the owner of the gallery, he would say seriously, no, I’m the head duster and added with a laugh, “you’ve got to go with your skills after all.” His real skill was the way he would put people at ease and make them feel special. He was knowledgeable in so many different areas, a bit of a trivia king, charming and laughed easily, and iconic figure at the gallery. His passion of the arts and helping fledgling artists succeed in the art world, plus his many hours of talking with and encouraging potential future art stars prompted him to write a book “The Guide to Becoming a Professional Artist/copyright 2013. Being a only child and with no living family remaining, the gallery staff became his family and treasured home. El was there to teach newcomers, cheer on his co-workers, share in their happiness and their sadness, births, deaths, weddings, special occasions all the things that families share together, and his gallery family who loved him, will greatly miss him! Elliott with be interred at Happy Homestead Cemetery

The family of Harry Elliot Israel created this Life Tributes page to make it easy to share your memories.