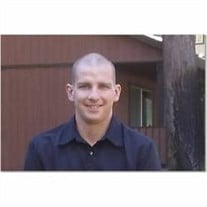 Gregory E. Osborne of South Lake Tahoe died at home on March 19, 2013 after a seven year battle with brain cancer. He was the loving husband of Corinna B. (Leary) Osborne of South Lake Tahoe. Greg was raised in Peabody, Ma and graduated from Peabody High School in 1990. He also attended the University of Massachusetts. At the time of his death, he was the owner of the Elegant Affair Catering Company in South Lake Tahoe. In addition, he was an officer in the Lake Tahoe Wedding and Honeymoon Association. Greg also worked part time for Friday’s Station at Harrah’s. Greg was an avid outdoors person. His passion was downhill skiing at the many ski resorts in the Lake Tahoe area. He also loved to mountain bike, kayak, fish, and golf in the area that he loved so much. He was a fan of every Boston sports team especially the New England Patriots. In addition to his wife, he is survived by his nine year old daughter, Emma Winifred, and four year old son, Gavin Ernest Raymond. He is also survived by his parents, George (Ernie) and Carol (Hodge) Osborne of Minden , Nevada and his sister, Leigh-Ann Osborne of Carson City, Nevada. He also leaves his maternal grandparents, Raymond and Marion Hodge of Peabody, formerly of Salem. He is also survived by his mother-in-law, Erika Leary of Germany as well as his wife’s brothers and sisters, Manuela, Martin and Rebecca and their families. Greg also leaves several aunts, uncles and cousins. He was predeceased by his paternal grandparents, George and Winifred Osborne of Peabody,Ma. PDF Printable Version

The family of Gregory Ernest Osborne created this Life Tributes page to make it easy to share your memories.