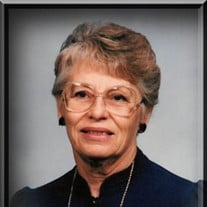 Gladys passed away peacefully on March 19, 2016 at the age of ninety-two. Daughter of the late Alfred and Lottie Chizek, Gladys was born and raised in Minnesota along with her two siblings. She shared fond memories of her childhood on the farm. Gladys began her adult life teaching in a one room school house after attending Mankato State Teachers' College. During World War II, she moved to Long Beach, California to work in the shipyards as a "Rose the Riveter". It was there that she met her future husband, Conrad. Following their wedding in Las Vegas, Gladys and Conrad moved to Philadelphia, then to the Bay Area where their three sons were born. In the early 1960's, the family moved to their beloved South Lake Tahoe. There, Gladys worked as an administrative assistant at the Lake Tahoe airport for nineteen years. As a young mother, Gladys was a devoted school and church volunteer and scout leader. In her later years, she loved spending time with family, being outdoors and gardening. Simple things, like sitting outside on a sunny day with her dog in her lap, enjoying the birds and mountain surroundings were among her joys. In her sixties and seventies, Gladys fulfilled her lifelong dream to travel extensively. She enjoyed arts and crafts, and was a gifted homemaker. Gladys joined the Tahoe Art League after discovering her talent for painting late in life. She was known to be genuine, compassionate and generous. No one was more organized, or had a better memory! Gladys is lovingly remembered by sons, Alan and Doug; her daughter-in-law; five grandchildren; two great-granddaughters; her extended family and old friends. She is predeceased by her husband of seventy-one years, Conrad; son, Larry; grandson Larry, and her brother, sister, and parents. ** A graveside service for Gladys and Conrad is set for Friday, April 1st, 2016 at 1:00pm at Happy Homestead Cemetery in South Lake Tahoe. ** In lieu of flowers, donations in Gladys's name may be made to the Lake Tahoe Community Presbyterian Church, 2733 Lake Tahoe Blvd., South Lake Tahoe, CA 96150.

Gladys passed away peacefully on March 19, 2016 at the age of ninety-two. Daughter of the late Alfred and Lottie Chizek, Gladys was born and raised in Minnesota along with her two siblings. She shared fond memories of her childhood on the farm.... View Obituary & Service Information

The family of Gladys Leone Ross created this Life Tributes page to make it easy to share your memories.