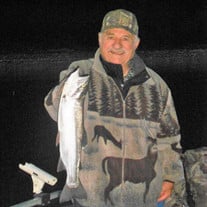 Gerald Frank Hendrickson October 25, 1935 - July 2, 2021 Gerald Frank Hendrickson went home to be with the lord on Friday July 2, 2021 at his home in South Lake Tahoe with his beloved nephew and care giver, Bill Sendle and Bills family by his side. Gerald was born in the Ellenville Hospital in Ellenville, NY on October 25, 1935, to Fred and Sarah (Coddington) Hendrickson and was the third of seven sons and two daughters born in his family. He spent his growing up years in the quaint country village of Kerhonkson, New York, and from there he left to enter the U.S. Navy. While stationed in California, He met his future wife Iva, who was a widow with three children. Upon their marriage, he decided that after honorably serving eleven years in the Navy, it was not the best career choice in which to raise a family. He then left the Navy and embarked on his successful welding career both independently and in the workforce. It was in the Navy that he learned to weld and apply his skills to ship repairs. He was predeceased by his mother, father, and six brothers: Francis and Rolando Arthur of New York, Harold Fred of Florida, Douglas Miles of California, Robert of Idaho, Albert of Arizona and a nephew, Pierre of New York. Several Aunts, uncles, and cousins also predeceased him. Survivors who are left with many warm and happy memories are his two loving sisters: Lillian Carrie LaCasse and Carolyn (Donald) Rider of New York, also nieces, nephews, great nieces, nephews and cousins. Jerry or Jake as his family called him, was extremely proud that his father and his six brothers all served in four branches of the U.S. Military. Jerry was also a very kind, compassionate, and thoughtful person who befriended everyone he met. With his warm smile and hearty laugh, he could turn your worst day into a brighter and sunnier one. He is going to be sadly missed by all his family, friends, neighbors and anyone who had the good fortune to know him.

The family of Gerald Frank Hendrickson created this Life Tributes page to make it easy to share your memories.