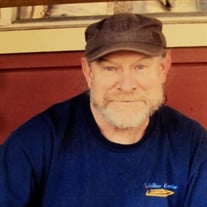 George Neverson Hydrick, III, the son of Rick and June Hydrick, passed from this life on January 21, 2021. He was born November 20, 1957 in Van Nuys, California and grew up in both Southern and Northern California. He attended schools in Tahoe from grades 4 to 12 and was a gifted trombone player who played many solos in jazz band. He graduated from South Tahoe High School in 1975 and spent his adult life in Idaho, Utah, and California, returning to the place he most loved, and called home—South Lake Tahoe—fourteen years ago. He enjoyed hiking and fishing alone or with his brothers or friends, and also enjoyed spending time with his many friends and cousins. His dog Skye was much loved and had accompanied him everywhere until her passing. George was a very free-spirited guy who loved life; his greatest love was his children, who meant more to him than anything else. George liked to cook and earned a credential in the culinary arts. A favorite family memory was he and his brothers catching several brook and rainbow trout on a backpacking trip through Desolation Valley, after which he broiled them in a delicate orange glaze sauce, to everyone’s amazement and gastronomic enjoyment. He was also an excellent carpenter and fine woodworker. He is survived by his children: Hardison Blake Hydrick (spouse Rebecca and their children: Hunter, Kyah, Ezra, Eden), Christopher Lance Hydrick (spouse Katie and their children: Atticus, Jones, Penelope, Mabel, Gus, Chip), Leah Jayne Hydrick Caceres (spouse Carlos and their children: Talmage, Nixon), Katie Layne Hydrick Hudson (spouse Brian and their children: Madox, Schafer, Lucy, Vivian), and Rachael Ann Hydrick. Also survived by George is his mother June Carsten and her husband Don Carsten, and George’s six siblings: Michaell Allen, Rick Hydrick, Carter Hydrick, Don Hydrick, Ora Smith, and Christi Hydrick. His father Rick Hydrick and brother John Hydrick preceded him in death. Because of covid restrictions there will be no viewing or public service. His family will gather for a small burial service at Happy Homestead Cemetery.

George Neverson Hydrick, III, the son of Rick and June Hydrick, passed from this life on January 21, 2021. He was born November 20, 1957 in Van Nuys, California and grew up in both Southern and Northern California. He attended schools in Tahoe... View Obituary & Service Information

The family of George Neverson Hydrick created this Life Tributes page to make it easy to share your memories.