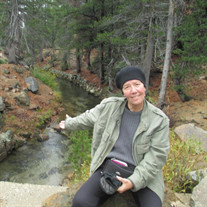 Francesca Imperial was born Frances Darlene Winters in Los Angeles California on November 25th 1956. She was the second of five children born to Rosie Imperial - Orozco - Winters and Raymond Wesley Winters. Francesca was pre-deceased by her Mother Rosie in 1965 when Francesca Pancha was nine years old. Her Father Raymond died in 1984, her eldest sibling, Linda Quandt, in 2009. Her loving friend, Barbara Head, died in 2007. And her beloved Jane Sears, in 2009. Francesca received her AA Degree from Delta College in Stockton CA – and later applied to San Francisco State University where she studied Theater Arts and Speech Communication. It happened – that while earning her AA Degree from Delta College – Francesca discovered and had fallen in love with the life of Theater – both in the community and while at Delta. To her credit, some highly accomplished performances issued forth from her intuitive sense of life’s emotional world and its articulation. In 1980, Francesca attended The American Conservatory Theater Summer Intensive in San Francisco CA and later continued on as a student in the Theater Arts Department at San Francisco State University. Francesca loved San Francisco and all the amazingly transformative experiences she was met with. She loved the world of academia – and life’s ongoing inspirational exuberance. It was only later in life, however, when she was to receive her Bachelor of Arts in Speech Communication from San Francisco State University. In 1982 Francesca travelled to Europe for a summer holiday. She had been particularly interested in visiting Greece – her eventual destination. While living the summer of 1982 – on the Island beaches of Lesvos – Francesca had become truly captivated and enamored by Greece, its culture, its people. Eventually, that summer, on the Island of Lesvos – Mytilene – she was to meet her partner of many years, Maria. It was throughout their shared life together – that she was to embody the essence of Greek culture – its heart – its passion – its strength and its beauty. In 1996 – upon her return to the United States – Francesca knew she had wanted to complete her education. She had always been interested in the field of psychotherapy and understood that, at some point in time, this was to be her area of higher academic pursuit. In 2010, Francesca received her Master’s in Counseling Psychology from John F. Kennedy University in Pleasant Hill CA and in 2015 – Francesca sat for the CA Licensing Board Exams of Behavioral Sciences and became a Licensed Psychotherapist. Francesca specialized in grief – loss and its transformational process. Francesca worked for many years as a bereavement counselor for Hospice. In 2017, Francesca earned a subsequent Masters; a Master of Arts and Consciousness in Transformative Arts from John F. Kennedy University in Berkeley CA. This had become the actuation of her thesis entitled The Pulse of Illumination. Francesca often sought nature and the out of doors experience. The following is an excerpt taken from her thesis: Within this astonishing living Universe, with its spontaneous prompts of indwelling brilliance, I find myself continually amazed at how that which adorns the heavens and suffuses the cosmos and celestial bodies with breathtaking expressions of aesthetic perfection, is the same ingress of energy that continues to inform and enlighten my own presence of creative discovery. And so, it is here, where I find myself within the circle of life among the contemplative folds between awe and wonder that I take time to pause. I take time to breathe in stillness and to reflect upon the manifested and unmanifested within the eternal unlimited ~ Francesca Imperial in Reflection ~ 2016 Francesca is survived by her sister Maria Winters, step - Sister Gay Scott, her brother Ray Winters, sister – in – law Debbie, her brother John Lehman – Winters, sister – in – law Helen, nephews, Miles, Ti, and niece Milana. Her nephew Anthony Leon and niece Janelle, great nephews Gabriel and Noah Leon, her niece Kristina Calvillo’King, and brother – in law - Lee Calvillo Francesca was a proud member of Alcoholics Anonymous. Sobriety Date July 21, 1998 “Over-Come Space, and All We Have Left is Here. Over-Come Time, and All We Have Left is Now.” Jonathan Livingston Seagull

The family of Frances Winters created this Life Tributes page to make it easy to share your memories.