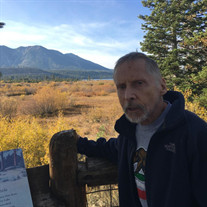 David James Foster January 27, 1943 – May 11, 2021 Husband, Father, Artist, Teacher, Friend and Child of God David James Foster, son of Melvin and Verna Foster (both deceased) of Maquoketa Iowa, lived a richly rewarding life. David was the second of nine children: sisters Gerry (bob deceased) Williams of Modesto California, Nancy (Wayne) Wagoner, Susan Foster, Linda (deceased) John Wiese, Terry (Dan) Miller, and brothers James (Marilyn) Foster, William Foster (deceased), Robert (Dianna) Foster, all Eastern Iowa. Eastern Iowa provided the perfect environment for childhood adventures of exploration and discovery. Additionally, he enjoyed expressing himself through art having won several awards, playing first the trumpet, then the baritone, and finally the tuba, Boy Scouting adventures and the youth group of the local Methodist Church. Attending the University of Wisconsin (Platteville) expanded his world of possibilities and opportunities. The wrestling coach discovered David’s agility, strength, and endurance and enlisted him to wrestle for the university for four years. During this time, he pursued his passion for art and discovered a new passion, endurance running. Soon after his graduation, David took a flight from Chicago’s O’Hare to Springfield MA for Peace Corps training and it was on this flight that he met his future wife Joanne, who incidentally was also travelling to the same destination for the same purpose to fulfill a personal dream of travel and adventure and experience another culture and language while serving others as a teacher in the small town of Santa Barbara de Zulia in Venezuela. After returning home David accepted and art teaching position at a small rural high school in Wisconsin where he started a wrestling program and art club both of which produced many award-winning athletes and artist. Two years later he moved his young family to San Francisco where he received a master’s degree in sculpture from San Francisco State University. After graduation David again entered the teaching profession teaching Art and Crafts and coaching the wrestling team at Atwater High School. He also taught a variety of art classes part-time at many community colleges in the central valley of California before securing a position at a newly created community college in the Sierra Nevada Mountains, Lake Tahoe Community College. It was another adventure provided and a dream fulfilled creating an art department. Davis created and chaired the art department at LTCC from September 1976 to June 2008. One thing most former PC volunteer share in common is the “can do” attitude. The college art department grew, the art staff expanded, the bronze program was developed, the study abroad program was introduced by David and later embraced by the college. And the family flourished. During this time and the years that followed the family grew. A larger home was needed with the same “can do” spirit and a chain saw a log home was built. David took to “daddy” immediately embracing backyard camping, bedtime stories, clay making creations, beach sandcastles, Halloween costumes creations and resident chauffeur. Later the activities would include assisting with homework challenges, supporting many competitive sports teams in which his children were involved, and mountain biking. Davis would become the Scout Master of Boy Scout Troop 594 for 6 years producing several Eagle Scouts. David’s personal creative expression expanded when, on a sabbatical to Italy, he discovered marble. What followed were many much loved and admired sculptures, especially Sentinel. Pieta, and Bus Stop He began returning to Pietrasanta Italy every year and would soon be, once again, teaching others, this time in Italian. He always felt that teaching was a privilege and good teaching was an art. Rarely did he walk away from an opportunity to teach or encourage. In June of 2014 his large bronze sculpture Ascending” was successfully installed and celebrated near the LTCC library. David passed away peacefully, quietly and with dignity in his home the morning of May 11, 2021 after a long illness. David will always be remembered for his enthusiasm, his endless energy, his vision, his quiet acts of kindness and encouragement. How he lived his life, how he treated others was a reflection of his personal Christian beliefs. He will be greatly missed by those he touched in his gentle, kind way, most especially his family: Joanne, his wife of fifty-four years, daughter Wendy (Ardavan Aslie, Isabella, Londyn, Vienna), son Foster and grand-dog Chiaka; son Brent Foster (Tam Truong, Noah, Chole), and daughter Robyn (Chad Kopplin, Thomas, and James). His memorial services was held at Hope Lutheran Church of the Sierra on May 18, 2021

The family of David James Foster created this Life Tributes page to make it easy to share your memories.