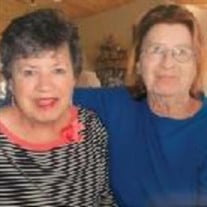 Barbara Kosco & Beverlie McClanahan Barbara Laine Kosco, age 86 years old. Died peacefully in her sleep on February 13th, 2020 at 2:30am. The night before she passed she was surrounded by her family and was in good spirits. She knew she was surrounded by love. Her sister Beverlie McClanahan also died just a short 13 days prior to Barbara on Feb 1st , 2020 she was 84 years old she died from a long battle with Parkinsons Disease which weighed heavy on Barbara’s heart. Barbara was born on March 2, 1933 to her Parents Edward and Lottie Sahlman in Fresno County California. She was the older of two daughters. Her younger sister Beverlie was born in 1935. Barbara and Beverlie grew up in San Joaquin, Visalia, Fresno and Tulare. They lost their mother at the young ages of 11 & 13. She got lost in a snow storm while deer hunting from horseback in Kings Canyon that brought her and her sister Beverlie even closer. You could call them inseparable. Barbara started working for AAA in Inglewood, California and it was in southern California where she met Norman George Kosco her husband of over 50 years. He passed away in 2010. They married in 1958 and had six children together. She enjoyed traveling with her husband to Baja, Hong Kong and many other places. They moved to South Lake Tahoe in 1979. They ran The Roadrunner General Store in Meyers from 1980-1998 and then retired. Besides spending quality time with her family and friends Barbara was a lover of books, arts, travel and animals. She always had a book in tow wherever she went. She was very artistic with painting including portraits she painted of her children. She loved learning new things all the time. She was a wonderful quilter and made beautiful blankets. She had a passion for mystery and a thrill for the casinos. Her favorite casino was Lakeside Inn. Barbara leaves behind her six Children. Twins Steven & Gary Kosco, Brad Kosco & wife Vivian Seifert, Jim Kosco, Ken Kosco & Laura Lyle. She leaves behind four grandchildren. Jason Kosco & Wife Jesika Kosco. Patricia Turben & Husband Isaac. Grandsons Kevin Lyle & Colby Lyle. Great Granddaughters Lucy Kosco, Lilly Kosco, Lainey Kosco, Nora Turben and Naomi Turben Barbara was a strong and successful woman. She lived a long and wonderful life. She was full of class and carried herself with grace wherever she went. She was loved in the community as well in her family. Her presence will be deeply missed. Barbara & Beverlie have been laid to rest at Happy Homestead Cemetery in South Lake Tahoe, California alongside her Husband Norman George Kosco and her sister Beverlie McClanahan alongside of Larry McClanahan her husband.

Barbara Kosco & Beverlie McClanahan Barbara Laine Kosco, age 86 years old. Died peacefully in her sleep on February 13th, 2020 at 2:30am. The night before she passed she was surrounded by her family and was in good spirits. She knew she was... View Obituary & Service Information

The family of Beverlie Ann McClanahan created this Life Tributes page to make it easy to share your memories.