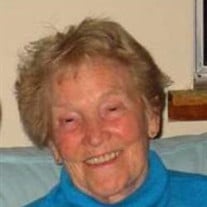 May 29, 1916 B April 3, 2012 D On Tuesday April 3, 2012, much beloved mother, grandmother, great grandmother and great great grandmother, Audra Maddox Strum departed this life. Audra was born in Delight, AR on May 29, 1916 to James and Mary Elizabeth Sparks. She married Laurence Maddox in Hot Springs, AR in 1943, and moved to the Bay Area that same year. They moved to South Lake Tahoe in 1958, where she was a busy mother, wife, and real estate agent. Following the death of Laurence Maddox, in 1973, she married Peter D. Strum in Hawaii in 1992 and then lived between Hawaii and South Lake Tahoe, traveling extensively around the country and the world. Audra is survived by daughters Wanda S. Maddox of South Lake Tahoe and Kathleen Maddox of Reno; daughter-in-law Marie Maddox of South Lake Tahoe; grandchildren Dan Heinbaugh, Deanna Maddox Brothers, DDS, Denise McCarthy, Darrin Maddox, Kirsten Peterson Johansen, Shane Phenix and Shannon Phenix; as well as many great grandchildren and great great grandchildren. Burial will be private. A celebration of life will be held at a later date. In lieu of gifts or flowers, donations may be made to Barton Hospital. McFarlane Funeral Home in charge of arrangements. PDF Printable Version

The family of Audra Lorine Strum created this Life Tributes page to make it easy to share your memories.