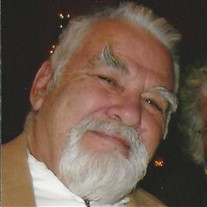 Long time South Lake Tahoe resident and business owner, Alexander Osti, passed away peacefully of heart failure during the early hours of February 21, 2016. He was 85. Alexander was a first generation Californian, being born in Santa Monica to immigrant parents. He entered the workforce at the age of 13, when he was hired to work in a slaughterhouse. He retired as a journeyman butcher in 2006. During his career, he worked in numerous slaughterhouses in both Southern and Northern California, Harvey's Casino as a meat cutter and establishing his own business, The Ranch Butcher, here in Tahoe. The joy of his life was his family and the love of his life was his wife, Elvira. The two were inseparable. If you saw one, you knew the other was somewhere close by. Alexander was always telling the story of how he met Elvira and their 90 day romance that lasted until her death in 2007. If he could, he would have joined her then, but he stayed to care for his family for another 9 years. During those years, he saw his grandsons marry and have children of their own. He was so proud of them all. He is now joined with Elvera and no doubt the two of them are causing mischief. Alexander is survived by his son, Lamont "Buffy" Osti and his wife, Constance Osti; his daughter, the former City Council member and Mayor, Margo Osti; his grandson, Adam Osti and his wife Allegra Osti and their daughter Alexis Osti; his grandson, Eric Osti and his wife Trisha Osti and their children Hayden and Sophia Osti. He is also survived by many nieces and nephews throughout California. We will greatly miss Dad. His funeral will be on March 3rd, at McFarlane Mortuary in South Lake Tahoe. The rosary will be recited at 10:00 AM, the Mass of Christian Burial will be celebrated at 11:00 AM, with the burial at Happy Homestead Cemetery immediately to follow. Please keep Mom and Dad in your prayers.

Long time South Lake Tahoe resident and business owner, Alexander Osti, passed away peacefully of heart failure during the early hours of February 21, 2016. He was 85. Alexander was a first generation Californian, being born in Santa Monica... View Obituary & Service Information

The family of Alexander Osti created this Life Tributes page to make it easy to share your memories.