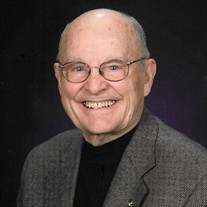 Albert V. Bauder, age 95 of South Lake Tahoe, CA. died at his home August 9th, 2021. Al was born November 16, 1925 on a farm near Monango, North Dakota, to Albert and Katie (Schlinker) Bauder. He grew up and attended school at Ellendale graduating from High School in May, 1944. The following month he was drafted into the Army and after a short training period was sent to Europe and served with the 94th Infantry Division, Third Army, in three Campaigns serving under General George Patton. When he was discharged in 1946, he returned to Ellendale and attended the State Normal and Industrial College and then transferred to the State School of Science at Wahpeton graduating in 1949. He married Elizabeth (Betty) Krieger, September 1, 1948, and they made their home in Wahpeton until he finished school there. When he graduated, he was employed by Montana-Dakota Utilities in Ellendale, Ipswich, and Lemmon, South Dakota. The family moved to Wahpeton in 1955 where he worked for Hintgen and Karst Electric. In 1964 they moved to Fargo where he was employed in the Electrical Department at NDSU for 26 years, retiring in 1990. They moved to West Fargo in 1999 and California in 2020. Al was a member of Plymouth Congregational Church and was active on many boards and committees and put his electrical skills to use many times with the Fixer Upper Group in the Church. He was a Mason for 60 plus years and belonged to Fargo Shiloh Lodge, the Fargo Scottish Rite where he was honored with the 33rd degree and was a charter member and Past Master of Daylight Lodge. He was a life member of El Zagal Shrine, the Arab Patrol, the Herman-Schlinker American Legion Post in Ellendale, the VFW in West Fargo, the DAV, and the 94th Army Infantry Association. He is survived by his wife Betty, and two sons, Steven and his wife Linda, So. Lake Tahoe, CA., Brad, Austin, TX., granddaughter Kelsey and fiancé Jon, Austin, TX., sister-in-law Jeannette Bauder, Davenport, Iowa, and brother-in-law Gene Krieger, Deming, NM., 9 nieces and nephews. He was preceded in death by an infant daughter, his parents, brothers Orson and Merlyn and his wife Ann, sister Cornelia and her husband Don. There will be no memorial service and his ashes will be interred at the National Veterans Cemetery in Harwood, ND at a later date.

The family of Albert Vernon Bauder created this Life Tributes page to make it easy to share your memories.